Why Spotify Discover Weekly Is The Best Music Curation Tool?

Apple Music arrived with big bang. Its approach to music streaming is surprisingly old school. It relies a lot on human curation and its programming resembles old radio (some of the shows are definitely worth listening though). It´s biggest rival Spotify is relying more on big data. At the moment it seems that latter approach seems to be the winning formula. Eventually recommendation engines will become a core differentiator (as the libraries will become quite identical) for streaming services, so the headstart Spotify has is not insignificant.

Human curation was the way taste making happened back in the day. I used to rely almost totally to Dj Anonymous on my music recommendations. Best dj´s in the world have much more refined taste than any machine yet. The challenge with human curation is that it does not scale.

The recommendation engines were not really been yet up to task because the algorithms have not been advanced enough to recommend right songs. Music is nuanced thing and linear recommendation is not usually providing satisfying listening. Previous Spotify recommendations have been borderline ridiculous: 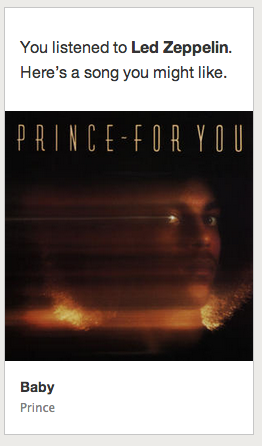 Previously there has not also been enough data available. For recommendation engines to work, you need to have massive amounts of data and something that is relevant. The key for Discover Weekly to work so well is that Spotify realized that the data they should be mining are the playlists people are making.

“For all the special sauce and the algorithmic work, the fact that we’ve kept it simple and that it’s just a playlist has really helped it resonate with people”
–Matthew Ogle (Discover Weekly Product Owner)

The more people are making playlists in Spotify more “human curation big data” they are gathering. Currently there are over 2 billion playlists in Spotify. Spotify has been able to strike the right balance on learning about your listening habits and combining that with the big data:

“On one side, we’ve built a model of all the music we know about, that is powered by all the curatorial actions of people on Spotify adding to playlists. On the other side, we have our impression of what your music taste is. Every Monday morning, we take these two things, do a little magic filtering, and try to find things that other users have been playlisting around the music you’ve been jamming on, but that we think are either brand new to you or relatively new.”
-Matthew Ogle (Discover Weekly Product Owner)

In the beginning I wasn´t that impressed with Spotify´s weekly recommendations. Majority of the songs I knew already (20+ years of record collecting has its handicaps). After couple of weeks I started to appreciate the brilliance of it. Spotify Discover Weekly has become my “comfort playlist”. It plays stuff I know, but drops every week couple of nice gems I had not heard or had totally forgotten. During working week I listen to lots of weird stuff outside my usual taste profile, Spotify´s weekly recommendations don´t seem to pick on those anomalies and the quality is constant:

Like mentioned earlier, eventually data will trump human experience. In many fields, we are already there.

“In the next generation of software, machine learning won’t just be an add-on that improves performance a few percentage points; it will really replace traditional approaches.
…
Today, you’re much better off building a smart system that can learn from the real world – what actual listeners are most likely to like next – and help you predict who and where the next Adele might be.”
– Eric Schmidt, Alphabet executive chairman