“Will there be people who stop buying Nike because of this?

But there will also be others who use this as an excuse to buy another jersey or pair of sneakers. Regardless of how loud the keyboard warriors and voices opposed to Kaepernick get, Nike will remain standing at the end of it all. And as they say, no press is bad press.” 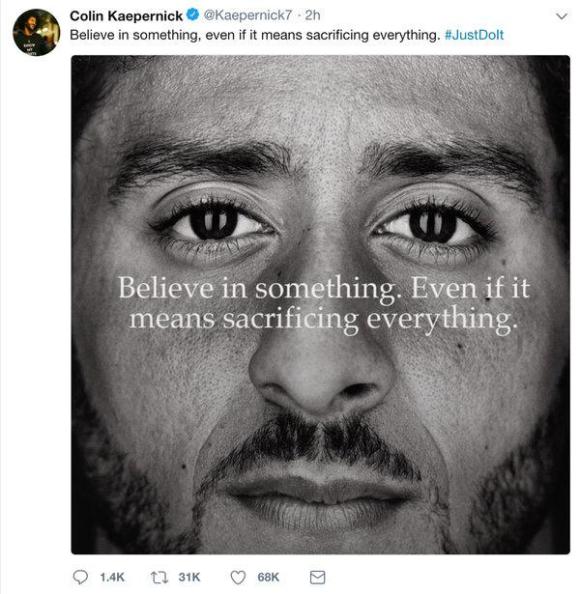 This single tweet is already the best AD of the year and already created $43 million in buzz for Nike.

Some argue that brands should not take a stand on controversial topics.

I beg to differ.

Brands should take public stand, when brand has actually something to contribute to the topic. If a brand actually has a stand, it is almost  Now more than ever. Majority of brands cannot actual be bold and shy away of all kinds of (even minor) controversy. Not Nike, this latest ad is just a continuum of deliberate and consistent marketing strategy that they have been following for years. Great brands know that they are not for everyone. Great brands are consistent. Great brands take risks.

Nike´s DNA is all about the athletes. Its main spokespersons (Lebron James among the few) have been vocal about the issues that prompted Kaepernick to knee down during the national anthem. Nike is known for standing by their athletes during their hard times (Tiger Woods, Kobe Bryant, etc.). Reflected to that, it actually would have been disappointing if Nike would not have been sponsoring Colin Kaepernick. He is a great and brave athlete, who uses the stage he has as a canvas to shed a light to social injustice and is then prevented to practice his profession. Not unlike Tommie Smith and John Carlos in 1968 in Olympics. Nike is taking a stand, but in a way that is true to their brand and will eventually sell much more apparel.

People (read: idiots) burning Nike shoes will not cost Nike anything (maybe they will buy new shoes afterwards) and actually gives Nike more publicity. All publicity is good publicity, because it is increasing your mental availability. Sure, this campaign will alienate some Nike buyers. Buyers, who are so stupid that they set their shoes on fire or rip their Nike socks.