#sometrendit2016: The Only 2016 Social Media Trends You Should Read 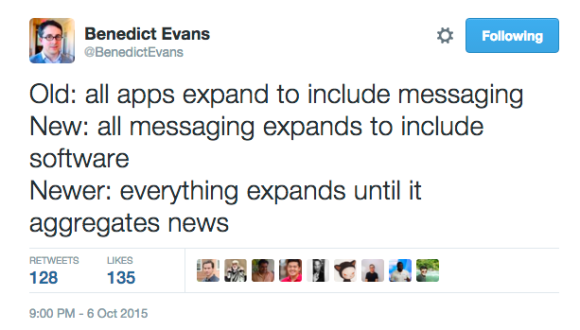 As the year approaches the end, it has become an annual tradition for me take a look at crystal ball and share my views with Kurio Social Media Agency on the next year´s social media trends.

For those adapt at Finnish, I recommend reading the whole report. If you are not interested in the predictions of 28 other Finnish digital marketers, you can also jump straight to the most important ones (mine) below.

Before I go into my answers, I have to quote myself from the last year:

I have to say that I have not been interested in social media as such for a long time. Do not get me wrong. Social plays crucial role in digital business. But I seldom think digital as a separate entity either: digital is air. Digital, mobile and social should be a part of every business. Sometimes at the core, sometimes playing supporting role and sometimes playing no role at all. Strategy is about deciding what to do, but even more importantly what not to do. If you are thinking social media as a separate unit you are missing the bigger picture.

The dominance of digital universe goes well beyond our traditional silos.

And here are the bold/boring predictions of 2016:

Internet will be build more and more upon instant messaging. We have moved to the latest phase of Internet: the Age of Messaging. What is most interesting, who will be the master of that era? If previous phase was the Age of Social and Facebook was the undisputed king, is it able to keep its lead? Currently it seems with the dual-strategy of WhatsApp and Facebook Messenger that Facebook will continue to dominate.

2. Social media platforms to look out for 2015?
Last year I was speculating about anonymous messaging and those services were not able to live up the hype. On the same speculative tip, I would keep an eye on live-streaming platforms like Periscope. It is easy to recognize the opportunities Periscope can bring to the brands. Bigger question is will they be truly interesting to actual users?

It is worthwhile to keep an eye on WeChat, because what it does today in China, Facebook will do in western world tomorrow with its Facebook messenger.

The huge portion (probably somewhere around 3/4) of sharing in social media is so-called “dark social”. This means that social media listening gives one-sided and even totally faulty picture about what people are really talking about. People share where the brands play no role.

This is great for consumers, because brands are not ruining your conversation or begging you to like them. It makes our work way more difficult. Established channels like FB and YouTube are 100% paid media. To some IM services you cannot get even when you are paying. There is no such thing as earned media anymore.

Despite all the hoopla about native advertising and new content agencies, the division of labor is simple. In Internet there is only good (or bad) content or good (mostly bad) ads. Ad agencies have shown that they cannot truly create content and content marketers have not been good at creating ads (which essentially move products of the shelves). There is role for both counterparts, but it is utter stupidity to think that you could replace one with another. Or that one agency could be great at creating both of them.

To see what I have been predicting in previous years, see the following links: