You Have Listened to Led Zeppelin, Would You Like to Listen to Prince?

First rule of being a planner:

You have to understand the target audience. Know as much as possible about them. Talk with them. But never think that your own behavior resembles anything that normal people are doing.

Unless you are targeting 30+ years old dudes still wearing sneakers and knowing too much about popular culture.

Majority of planners are snobs in various fields, and this does not exclude yours truly. Therefore I have never seen the reason for automated recommendation algorithms. I will always know what I want to listen or watch. I have spent majority of my life listening to obscure records and watching odd movies to be able to entertain myself in every occasion without outside help. If I need recommendation, I only trust in a handful of established aficionados, who have earned my trust.

I will always favor human curation over algorithm.
Therefore this recommendation in Spotify made me laugh: 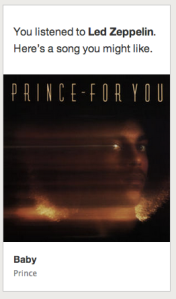 You have listened Led Zeppelin, now listen to Prince.

“Eugene Goostman” might be able to act like a human, but this recommendation did not raise hopes for reaching singularity for a while.

But here´s the trick:
I like Led Zeppelin.
I like Prince (the song is from one of my favorite Prince albums).

So actually recommendation was not off. It just came from surprising angle. Maybe the Spotify algorithm knows more than it appears. If there would be more people, who listen both Led Zep and the The Artist Formerly Known As Prince, the world would be a better place.

Eventually it boils down to this: as long as the recommendation pleases the audience, it does not matter how off or not it is. That is why I don´t really think that the future of streaming services lies in super-smart recommendation engines or human curation. It will be about vast catalog. Streaming service, able to secure The Beatles to its service, will probably go long way.

Maybe recommend some Rolling Stones to go with that.