Weapons of Peace: How To Rebrand AK-47?

Weapons of Peace (in Russian, has double meaning also as the world)

To quote Groucho Marx, the latter is a little bit like military music: a contradiction in terms.

However the first slogan is actually quite good as far as the slogans go. The reality is that guns kill people, despite what NRA says. If you are weapons manufacturer, the slogan “Kills both at home and abroad” only gets you so far. This slogan turns the focus from negative usage occasion (shooting people) to a higher goal (achieving peace). When brand talks about protecting it actually includes both the actual usage of the product and also the threat it provides thus the protection. The brand stresses that weapon will make a man courageous, alert and will create a sense of responsibility. They position the gun as the equalizer between strong and weak, the liberator of the world:

It precipitated not just a technological, but a social revolution. Freedom movements in Africa, Asia and Latin America could at last fight back against professional colonial armies. The AK-47 gave them the chance to demand rights and achieve justice. This is a weapon which helped people defend their families and futures, and demand the right to a peaceful future. 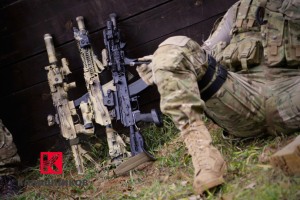 Great work from the branding agency. For some reason they have not used famous brand ambassadors like Osama Bin-Laden in the ads. The sad reality has been that AK-47 has lately been more of the weapon of choice for criminals & terrorists. When you watch the new marketing video it gives somewhat edited history of this “weapon of peace”:

Despite the uplifting marketing speak; gun´s inventor Mikhail Kalashnikov, who died last year, had some spiritual soul searching to be done regarding the weapon:

I keep having the same unsolved question. If my rifle claimed people’s lives, then can it be that I… a Christian and an Orthodox believer, was to blame for their deaths?

It remains to be seen how far this new brand will take the company as they are facing some severe challenges. American gun market has been growing during the last years. Because of the trade sanctions Kalashnikov has now lost the whole American market, where most of their hunting products were sold (besides AK-47, Kalashnikov has a hunting & competitive shooting range, it is unclear to me are those ranges under the same slogan). Growth in Asia (Malaysia & Thailand especially) is apparently filling that gap. B2C business is only one side of the story as their main sources of their revenue are military contracts. Although they are most famous for AK-47, huge missiles deals are where the money really is. Apparently brand plays important role also in military cabinets, because CEO Sergei Chemezov declared his ambition to become the Apple of ammunition:

A brand is a considerable asset for any leading company, although we have a long way to go to Apple’s $100 billion brand. I hope Kalashnikov will become as recognised and valuable.